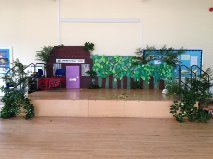 Staging for Into the Forest, using real tree branches.

July 2015 saw the first musical production, Into The Forest, written, produced and directed by the founder of Sing a Book – Yvadne Bygrave. The production was based on the book by Anthony Browne and had a cast of 60 year 6 pupils from Belmont Primary School. They performed it to an audience of over 500 comprising of pupils, teachers, Governors and parents.

The costume and stage design, created by Julie Evelin (a very creative TA), consisted of real greenery collected from the school grounds and costume that really reflected the characters’ personality inferred in the book.

Yvadne was determined to involve all the year 6 pupils in the final performance and in the staging of the production. This was evident in the play as each had a role, as a narrator, actor, dancer, singer or part of the choir. The choreography was created by the pupils who performed it and was simple enough for each to execute it well, yet diverse enough to hold the audience’s attention.

The 7 original songs, written by Yvadne Bygrave and produced by Michael Fuller and Johnathan Haizel of NZ Music, not only captured the thoughts and feelings of the characters, but also enriched the scenes. The songs were memorable, easy to learn and varied in genres, exposing the pupils to a range of different rhythms and musical styles.

“I thought it was amazing!”

“I loved the script and songs.”

“I loved it and the songs were lovely!”

“I loved the song Hansel & Gretel because it describes how they are feeling about not seeing their parents.”

“Brilliant! Reminded me of ‘Into the Hood’ (Zoo Nation). Very well done!”

A special thank you to the headteacher, Mrs Caplin, for permitting an original play for the year 6’s end of year performance.